No matter if it is winter or summer, there are always opportunitites to take photos of the beautiful nature. And the great views are so tempting to be captured in all their width as a panorama.

One day we made a trip around island Kvaløya. Because of only couple of hours of light (or at least twilight), we managed to go around only part of the island. This is how noon looks like in December.

Unfortunately, it was getting dark very quickly when we got to Sommarøy island. So I took only a few photos, then we found one geocache hidden under snow and were on our way again.

The city of Tromsø. We took a cable car to the top of one of surrounding hills. The view from up there was great but the wind was so strong and cold. It felt like it was -20°C. I was also quite lucky because I took enough photos to make this panorama and then the batteries in my camera died due to the cold.

And finally, New Years Eve. Also it was our last night there. The greenish smudge across the sky are the Northern Lights.

Week in the northern Norway – that was how we spent the Christmas holidays. At first I thought there would be no light during the day and I was quite suprised to find out there are actually couple of light. However, the sun never rose above the horizon – that happens in late January.

But still, how often one can sleep till ten o’clock and say she/he woke up just before the “sunrise”? (At least for someone who is from middle Europe…)

Or take a look out of window and see a couple of reindeers?
(I still don’t get how they can drink the salty sea water) 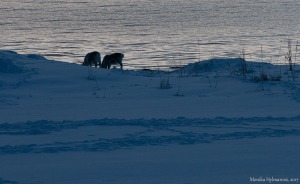 Or meet small reindeer herd crossing the road?
(this one was little behind the herd) 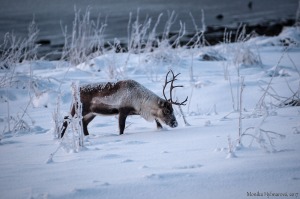 And then just admire the cold and white nature and occasional red house.

The custom of celebrating New Year’s Eve with fireworks seems to be ubiquitous. We also noticed that people fired some kind of the red lights that were much brighter and lasted much longer than regular fireworks. We guessed it might be some kind of flare and later it was confirmed by our hosts. We learned from our hosts that the midnight of New Year’s Eve is the only time when people can fire red flares which otherwise can only be used in case of maritime distress. 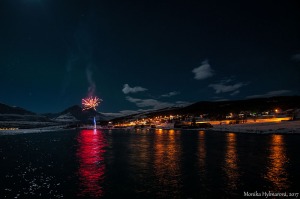 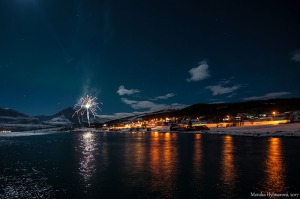 What is Aurora Borealis? Rather than I would copy-paste the info from other website, you can check out Aurora Forecast site for detailed explanation and other information. This site also contains tools for predicting when and where the ligts will be visible.

We saw the lights three times during our stay. When they were strongest, we were just watching, amazed. It is such a beautiful and magical phenomenom. The green lights were literally dancing across the sky.

On the first four photos, you can see that the lights can be moving very quickly. The white line on the left side on the photo which is moving toward middle and then right are the headlights of a single plane taking off. 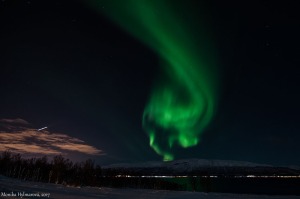 Here is one vertical photo of the Northern Lights, this time with the Big Dipper asterism (part of constellation Ursa Major). I was suprised that the stars are so visible there.

Even when the sky is partially cloudy, the lights are still clearly visible.

Well, this was one of the most unforgettable experience I ever had. Also, the northern Norway in winter made it to my list of must-visit-again.

Pravčická Brána is the largest natural stone bridge in Europe. It is considered the most beautiful natural form in Czech Switzerland and is the symbol of the entire area. Its dimensions are remarkable, although when looking at it close up it seems bigger. The span of the arch at the bottom is 26.5 m, the height of the opening is 16 m, width 7-8 m, minimum thickness 3 m, and the surface area of the bridge is 21 m above its base.

In my previous post I posted photos from valley of river Krinice, where we were hiking in the morning and early afternoon. Then, after late lunch in town Hrensko, we climbed up to Pravcicka brana. I wanted to take some photos with setting sun, but the more we waited, the clearer it was that the sun will take too long to set. Therefore the late afternnon light had to suffice. Also, we were about 7km from our accomodation. The path home lead through forest and we wanted to have at least some light on our way home.

There is the holiday chateau known as the Falcon’s Nest at the base of the arc. 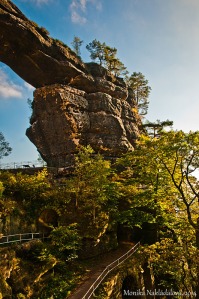 We were halfway to our hotel when the golden hour came…

The Czech Switzerland are is national park on borders with Germany (where the park continues and it is called the Saxon Switzerland). It is known for its beautiful gorges and mostly for The Pravčická brána – the largest natural sandstone arch in Europe.

I spent there three days last autumn. On the first day we hiked down the valley of Kamenice river to town Hrensko and from there we climbed up to the Pravcicka Brana and then we returned to our guest house. As the whole track was about 20km long, I had a lot of opportunities to take photos, so in this post, there are only photos from the firts half of the trip. The photos from Pravcicka brana will be in the next post (hopefully 🙂 ).

The path from Mezni Louka, where we were staying, led through forests, where fallen trees are left as they are. 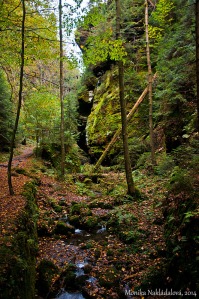 Probably, due to the humid climate on the bottom of the valley, there is moss covering almost every tree. There are even three-leaf clovers growing from the trunks. 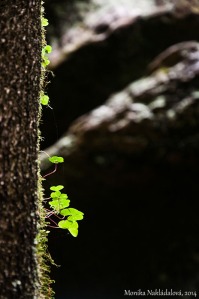 This is where the path met the river Krinice. 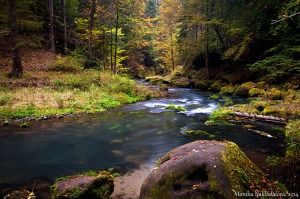 Some more moss on the ground… 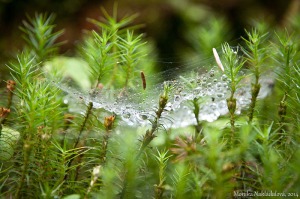 and on the trees. 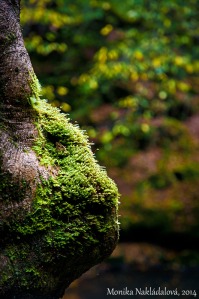 Then the rocks were making the bottom of the valley more and more narrow. 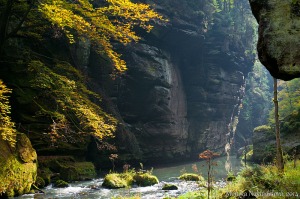 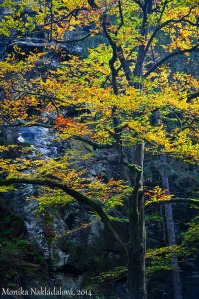 And at the end, we had take a boat to get through the gorge. Actually, the boat on the photo is really old one and it is not in use any more, there are newer ones now.

Dalesice Reservoir lies near city Brno, the second biggest city in the Czech Republic. It serves as a water source for near nuclear power plant Dukovany. It’s dam is 100m hight and it is second highest in Europe. The reservoir was created by flooding the valley of river Jihlava.

The first panorama was made of 17 vertical photos, which were taken from Wilson’s rock (a viewpoint above the reservoir)

This panorama was made of only 10 photos.

Last week of January was the week when I had holidays and I planned to enjoy them as much as I can, which means, that I had not only packed my skiing equipment but also all my camera gear. One late afternoon, just when I got back from skiing, I took all my stuff and headed out for some photos. There was a small river near our residence and it was perfect opportunity to take photos of ice covered stones surrounded by flowing water. 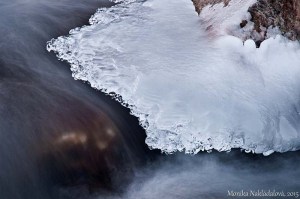 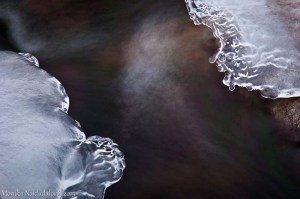